When potential customers in South East Queensland contact us about designing a custom ute tray for them, one of the questions we always get asked is, “Can aluminium ute trays carry the same load as steel ute trays? Ingrained in this question is the notion that steel is stronger, so therefore it must follow that it can carry more!

If we think about this there is some logic to it. For example, a landscape gardener in places like the Sunshine Coast or Gold Coast who needs to carry things like soil, rocks, gravel, concrete and heavy machinery would naturally think that it would make sense to opt for a stronger material to build their custom ute tray with. In terms of the tray itself and the sides of the ute tray, this would make perfect sense. After all, steel ute trays in South East Queensland are built for hard yakka and landscape supplies can be quite damaging. Steel ute trays also look strong and sturdy so it is natural to be attracted to these features.

However, steel ute trays in South East Queensland, while strong and durable, come with a tradeoff – compared to aluminium ute trays, they reduce the load capacity of the vehicle due to the heavier weight of steel. It is not the ute tray itself that determines the load capacity. The weight of the ute tray is only one part of the equation. Rather the basis for all load calculations is the carrying capacity of the ute itself.

On average most ute makers would claim their ute has a carrying capacity of around one tonne. This is the total weight the vehicle can carry. After purchasing a ute, many ute owners add aftermarket accessories to their ute such as custom ute trays, under tray toolboxes and ute canopies. The added weight of all these accessories needs to be deducted from the original carrying capacity advertised by the manufacturer to arrive at the true load capacity. 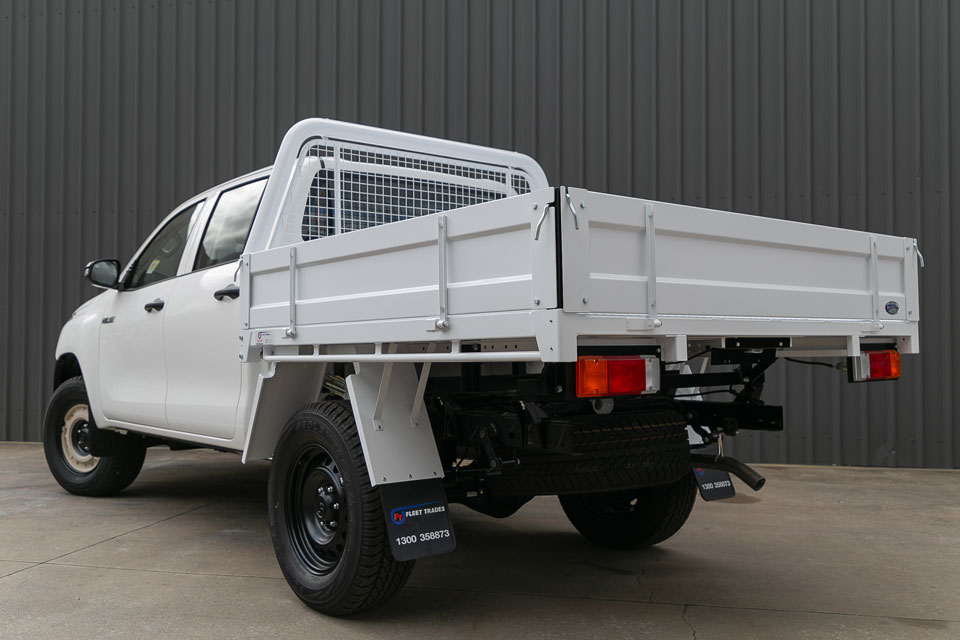 Of course, suspending ute trays on a crane is not what happens in real life! While there are other factors to consider, such as weight distribution, in practical terms, steel ute trays significantly reduce load capacity compared to aluminium ute trays and so careful consideration needs to be given when adding aftermarket ute trays to your vehicle.

A word about Hydraulic Tippers.

The use of hydraulic tippers is becoming increasingly popular as they can be added as an aftermarket accessory fairly efficiently. Therefore, it is also important to consider the weight of the hydraulic tipper in the planning stage to ensure your ute will still have the load capacity you require. Our team at 4WDaccessoriesdirect can help you with advice and calculations when customising your ute tray.

In practical use, aluminium ute trays compete fairly well with the steel ute trays in terms of the load capacity they help deliver. It becomes a bit of a trade-off between the strength of the tray itself and the overall load capacity. It is important that your ute tray is fit for purpose and does the job you need it to do. Custom ute trays allow for careful design and planning to ensure your ute tray does in fact meet all your needs.

Please talk to us about the many options we can provide you, including aftermarket accessories and fully customised ute trays, toolboxes and canopies.